The baby Range Rover proves a slow burn for our motoring correspondent, but ultimately he’s smitten

When my wife first met me, she thought I was insufferable. A loud, brash, over-confident jock with a penchant for deck shoes and a far too inflated ego.

Over time, I guess I must have grown on her. As she got to know me, perhaps she realised that some of that was a show: nervousness at meeting new people. A front that didn’t really express my true self.

Or maybe, after four years at university, she simply got bored of me repeatedly asking her on dates and decided to give in.

Either way, we ended up together, and nearly two decades later we’re still going strong.

Which is rather how I feel about the Range Rover Evoque. When it arrived, I was instantly unimpressed (oddly, my wife’s initial reaction was positive. She liked the colour, apparently). It seemed too flashy for my middle-aged taste. There were too many bells and whistles and I found the touch-screen controls for things like heating, the stereo and iPhone toggling to be all but incomprehensible. 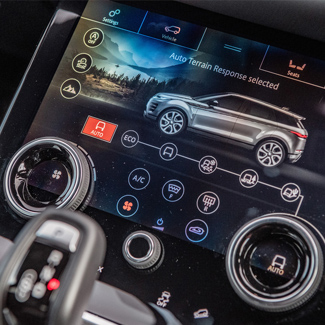 This, I thought, is not going to be a happy week of motoring.

And then, oh so gradually, something clicked. By the fourth day, I relished every little detail about the Evoque. The seats are the finest I have sat in since my Mum and Dad splashed out on a Multiyork sofa in the late 1990s. They cosset you, offering instant comfort and long-term support. Seriously, I don’t think I’ve ever been this comfy in a car.

The 180bhp engine is another revelation. I didn’t expect it to feel fast, but there’s plenty of poke across the rev range. Driving in traffic is easy thanks to the smooth automatic transmission, while motorway hauls are made effortless by virtue of innovations like adaptive cruise control and lane keeper.

That said, the latter of these gadgets could be improved. On a car such as the Volvo XC60, the combination of adaptive cruise and lane-keeping tech functions as a sort of autopilot. Gently rest your hand on the steering wheel and it’ll keep you a constant distance from the car in front and on the straight and narrow with very little fuss.

In the Evoque, though, the lane-keeping felt more intrusive, as if the car was occasionally possessed by the ghost of some long-dead rally driver who liked nothing better than swinging a hard right on a forest track. I felt it worked against me, rather than with me.

That aside, once I’d sussed out the controls, the rest of the Evoque’s tech was very pleasing indeed. I confess to being permanently bamboozled by Apple Car Play, but that may be because I stream via Spotify, which doesn’t seem to work on the platform. But when I did finally get my choons to play, I was taken to a higher realm by the sound quality. Honestly, it’s like sitting in a concert hall where you can identify every nuance of every note. Faure’s Requiem has never sounded so good. Not on the M25, at any rate.

Something else that’s never happened to me before is the endless comments about my car. Bearing in mind that I drive a lot of press cars, you’d think I’d be accustomed to people remarking on my wheels. But I can’t think of a vehicle that’s prompted such a reaction as the Evoque. Everywhere I went, someone commented on my beautiful Range Rover, wondering if I’d come into money or embarked upon a life of crime. 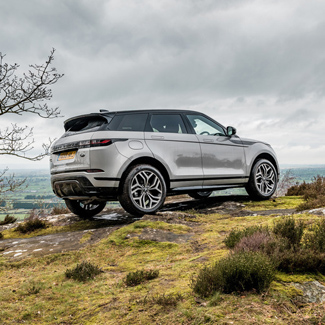 And herein lies my sole reservation about the vehicle. In case I haven’t made it clear, I find it to be wonderful, in pretty much every respect. But, for me, it’s just a little too in-your-face. A bit too “Ha! I’ve got a load of cash and I want the world to know!”

The silly thing is, it’s not actually that expensive. You can have an entry-level D150 FWD model on your drive for about £259 per month on Personal Contract Purchase (PCP). A lower sum than you’ll pay for a much less glitzy Volkswagen Tiguan. But because it has the Range Rover badge on the imposing bonnet, people think it’s some kind of millionaire’s motor.

For me, that’s a reason not to buy one, no matter how much I came to adore it. For others, that’s probably precisely why they would choose an Evoque: Range Rover impact for Volkswagen money.

All I can say is this: I really didn’t want the Evoque to go back at the end of the week, which was quite a turnaround from my initial reaction.

If you enjoyed this article, you may like: Ten of the best winter holiday destinations

You may also enjoy: Three things to love and hate about the new Defender

Just Recruitment is recruiting for Bendi Flexi Forklift Drivers on behalf of a busy company based on the outskirts of Bury St. Edmunds, Suffolk.

This is a temporary to permanent position for the right candidate with an immediate start.

Hours of work are 7.00am - 3:30pm and you must be flexible within these hours depending on the company’s needs.

Paying up to £10.00 per hour depending on experience.

Please note you will be required to have a face to face interview with the company before starting.