Want to rediscover your love of driving? Tim Gibson reckons Subaru’s latest grand tourer is a good place to start

It’s a crystal clear evening in the countryside. I’m leaving a late meeting in the middle of nowhere, and the road is empty. It’s a twisting A-road, full of beautiful bends and crisp cambers. The sort of road that just begs to be driven.

And, boy, have I got the car to drive it in: the new Subaru Levorg. A 2.0-litre petrol-powered grand tourer that looks every inch the spiritual successor to the super-fast Imprezas whose DNA it shares.

To be clear, it’s not the fastest car by any stretch. The engine generates 148bhp, which isn’t a huge output. But Subaru’s symmetrical all-wheel drive set-up makes perfect use of every single one of those horses. It’s like someone has snuck out and painted glue on the tyres. They just won’t give up their grip.

All of which makes for a thrilling experience. It’s not so much that you drive the Levorg quickly. I don’t think I break the speed limit once during my absorbing drive home. But the razor-sharp handling and astonishing poise mean you feel every bend and, yes, can take them a bit more briskly than in a conventional family car. 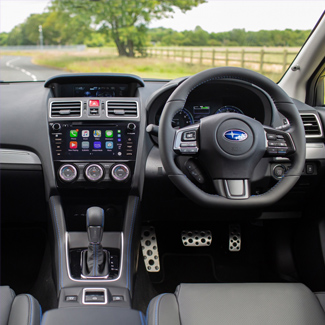 I’ll be honest. I’d forgotten how much I love driving until I piloted the Levorg for a week. I don’t think there was a single journey that didn’t end with me taking a detour, just to add a few minutes to my time behind the wheel. Likewise, I made sure every trip incorporated at least one country road. I think it would have been rude not to.

This is the sort of car on which Subaru built its reputation in the 1990s: a dependable estate with a decent-sized boot and plenty of room for the whole family, but offering the sort of driving experience that would keep any hot-hatch-loving boy racer on their toes.

Indeed, if you grew up as I did hankering after a gold-wheeled Impreza WRX, the Levorg is a pleasing trip down memory lane. It’s like turning on the radio to hear Oasis blaring out. Or popping home and opening the fridge to see it full of pork pies and Scotch eggs. Takes you right back to your youth, summoning all the emotions and excitements of the past.

And here’s the thing: because, for most of us, the Impreza WRX was just a dream. Even if we could afford to buy one, the cost of insuring it put it way beyond reach. So we made do with our souped-up Golfs and Escorts, longing for the day when we became respectable grown-ups whose car insurance premiums didn’t run into the thousands of pounds.

Now, that day has come. And the Levorg represents the acceptable face of our teenage longing. It’s a smart family car, one that looks perfectly at home in the office car park. It’s practical, safe (very safe, thanks to a dizzying array of active safety features) and hugely comfortable. In fact, you can see that Subaru benchmarks itself against Volvo when it comes to all three of these features.

Where it’s in a class of its own, though, is in delivering sheer driving pleasure. Honestly, it’s brilliant. Just a dream come true.

Okay, so it’s fairly thirsty (I averaged 32mpg during a week of mixed-use, but with a lot of motorway work) and the interior isn’t a patch on more premium offerings. And some will find the styling a bit weird, as is always the way with Japanese cars.

Oh, and the heated seats either burn your backside to smithereens on high setting or deliver less warmth than a rabbit’s fart on low setting.

These niggles aside, the Levorg is a winner. And, once you’re piloting it along a quiet country road, you’ll forgive it anything. It’s sublime. Totally sublime.

That’s what I think as I career along on my way home, at any rate. In that moment, I can’t think of a car in the world I’d rather be driving. Not a Bentley or a Porsche or a Mercedes-Benz can match the Levorg for the base pleasure it delivers. A bit like Oasis, really: flawed, absolutely, but impossible to resist.

If you enjoyed this article, you may like: Just testing: Range Rover Evoque D180 First Edition

New job
Designer
About the role

Are you an experienced Designer looking for your next opportunity?

Are you proficient on a MAC?

Just Recruitment is recruiting for a Designer on behalf of a company based on the outskirts of Kelvedon.

Just Recruitment is seeking a Small Plant Maintenance Engineer to join a company on the outskirts of Halstead, Essex.

The company will consider a graduate/college leaver with a genuine interest in Mechanics / Engineering, as they can offer in-house training and guidance.

A competitive salary is on offer with a wide range of additional benefits.

Performance-based yearly bonus scheme, with 50% paid in December and 50% in March.

Working Monday to Friday, 7.30am–4.30pm – Must be flexible to work shifts to assist with holiday cover/absence when needed.

Just Recruitment is recruiting for an experienced Mechanical, Electrical and Trim (MET) Technician on behalf of a company based on the outskirts of Sudbury.

You will be keen to get involved with all aspects of the Bodyshop.

Just Recruitment is recruiting for a Semi-Experienced Estimator on behalf of a company based in Earls Colne, Essex.

Are you an experienced HR Administrator looking for your next role?

Just Recruitment is recruiting for an HR Administrator to join a company on a part-time basis (20-25 hours per week) to cover maternity.

You will have experience in working with confidential information and in an HR environment, as well as have good analytical skills.

This is a part-time, contract position working 20-25 hours per week.