Just a book review: The World According To Physics by Professor Jim Al-Khalili

In an age where knowledge and ignorance appear to be on the same rising trajectory path, Peter Foy takes a look at a book written by an author who is passionate about fighting ignorance

There is a common misconception that people in the ancient world believed the world to be flat. In fact, from at least the time of ancient Greece and probably ancient Egypt, we have known that the world was round. Look at classical depictions of the god Jupiter, he is frequently shown holding the earth in his hand, a spherical earth!

To be accurate, it was known that the world was round, but the knowledge was not universal. The curation and dissemination of knowledge, especially what might be considered largely academic knowledge, was the purview of an elite. In an age before popular education an individual’s view of the world and understanding of how it worked, would be informed by myth, fable, and folklore. Fairytales and superstition filled the vacuum created by not having education.

We might look back on our forebearers and laugh at their innocence, or scoff at their ignorance; but the unfortunate truth is that in the 21st-century ignorance, or fake news as we now call it, still shapes the thinking of many. In the past week, the news featured the story that three 5G masts were attacked by arsonists. The perpetrators wanted to destroy them because they were the source of coronavirus. Ignorance is alive and well.

Professor Jim Al-Khalili is passionate about fighting ignorance. You may have heard his excellent BBC Radio 4 programme, The Life Scientific. A successful broadcaster, who popularises science he is also a professor of Physics at the University of Surrey. His latest book, The World According To Physics, is an attempt to introduce “some of the most profound and fundamental ideas in physics.” He tackles his task in a way that will, hopefully, popularise the subject but never dumbs it down. 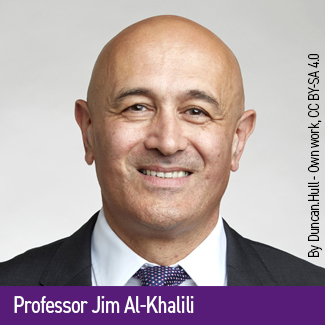 He has a clever way with words that can turn some very heavy concepts into plain English, but he never patronises the reader. If like me, your most recent exposure to quantum physics was an episode of Doctor Who, then there will be parts of this book that you may have to read more than once before you “get it”. But the professor guides you through the challenge. Incidentally, the chapter on The Quantum World was a tough read but worth the effort. Good science fiction is entertaining but science facts are truly awesome! I challenge anyone to encounter the Two Slit Experiment for the first time and not be amazed.

Whether he is discussing Newton, Einstein, Thermodynamics or Quantum Mechanics, professor Al-Khalili does it with both joy and clarity. There really is an infectious joy in the way he tackles these subjects. As a consequence, this book will appeal to a wide readership. It may well inspire a young person to embark on a career in science or it might just be a very entertaining way to pass away some self-isolation time!

A while ago we published a book review on these pages that the editor sub-titled with the phrase:

Pointed and possibly cruel. Today I can say, I have read this book and encourage all of you to do the same. And if you come across someone who believes that radio masts are the cause of pandemics; give them a copy!

The World According to Physics is published by Princeton University Press.

If you enjoyed this article, you may like: Can’t find the right word to describe how you feel? Reach for The Happiness Dictionary

You may also enjoy: What has Coronavirus meant to Just Recruitment?