We have been warned that this year, Christmas will be a little less joyful. Limitations will be placed on what we can do and who we can do it with. The newspapers and Social Media are talking about an unprecedented curtailing of Christmas, but it’s not unprecedented. In this short trip down memory lane, Peter Foy, tongue firmly in cheek, recalls a time when Christmas was banned.

In 1647 the UK parliament passed an Act that officially outlawed Christmas. With the sharp wit and sage wisdom for which they are famed, MPs declared, as a fact of law, that Christmas did not exist and the celebration of it was a punishable offence. Clearly, the governance of the UK in the 17th century was in the hands of people who were completely out of touch with popular sentiment. 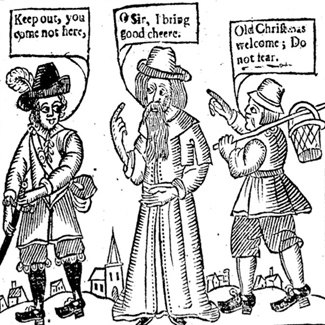 It makes you realise how fortunate we are today.

So, what was happening in the mid-17th century that called for such drastic action? Well, it is a long story and has a lot to do with religion and Europe. It started with an Augustine monk who went trick or treating on Halloween 1517, it involved Henry VIII’s desire for a divorce, it culminated in a bloody civil war that saw the shortest king in England’s history being made even shorter and Britain becoming a republic. A republic that was ruled by a Christian group called Puritans. Who were the Puritans? They were to 17th century Britain what the Taliban are to modern Afghanistan. Someone once described a Puritan as:

A person who lives in mortal fear that someone, somewhere, might be enjoying themselves.

They believed that any outward demonstration of fun or joie de vivre meant that you were a papist and therefore destined for an eternity in Hell. These guys were the original killjoys. Indeed, if you look at a portrait of a Puritan family from this time, they all appear to be sucking on lemons. Smiling may not have been a sin, but smiles were a gateway to sin!

It wasn’t a surprise that they were not big fans of Christmas but remember this was the 17th century. There was no Black Friday or Cyber Monday; Christmas was a religious festival the main celebration was in church. True; folk would party, drink would be taken, and a few shapes thrown on the dance floor. Probably a few inhibitions would be lowered, all enough to outrage a Puritan. 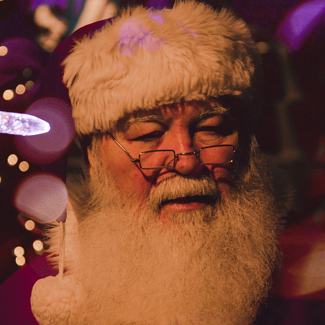 So, they banned Christmas. They went so far as to send soldiers into church to disrupt communion services and insisted that shops and parliament be opened on Christmas day. Obviously, some people accepted these new rules and went along with the law but quite a few opposed them. There were illegal parties and a few shops were ransacked but mostly the British protested in the way we always protest. Folk began to mock the rules.

To give voice to this ridicule they needed a persona who, being fictional, was beyond the reach of the law. Enter Father Christmas. There is a wonderful pamphlet, from 1653, called A vindication of Christmas, lamenting the abolishment of Christmas by the Puritan government. In it is the cartoon below. The central figure of Father Christmas proclaims "O Sir, I bring good cheere" while the roundhead soldier warns him to "Keep out, you come not here." The yeoman Brit, on the other hand, is saying "Old Christmas welcome; Do not fear."

This pamphlet is one of the earliest references to Father Christmas I know of. And isn’t it interesting to note that 4 centuries ago, people were stronger than government?

Of course, Puritanism didn’t last, and the old order was soon restored. Charles II, the Merry Monarch, was crowned King; Christmas was put back into the calendar and all was well with fair Albion. Or at least it was until the plague came in 1665, London burnt to ashes in 1666 and the country saw the largest increase in STDs ever recorded. The Puritans would have said that was the inevitable judgement for using lemons to flavour gin and not to suck on them as a penance.

If you enjoyed this article, you may like: Surprising jobs celebs did before they were famous (no. 4 is completely unexpected!)