Imagine the scene. It’s Christmas Eve we are in Austria in the year 1818, the sun has set, and the only light is provided by the moon and flickering candles through small windows.

Wherever you look, the snow is deep and crisp; in the distance we can make out the figure of Father Mohr, the local Catholic priest, he is walking the three kilometres from his home, in Oberndorf bei Salzburg, to visit his good friend Franz Xaver Gruber, in the neighbouring town of Arnsdorf bei Laufen. Gruber is the local schoolteacher, who also serves as the church's choirmaster and organist.

The priest is on a mission. In his pocket, Fr. Mohr has a poem; words he wrote some two years earlier. He needs a carol for the Midnight Mass that is only a few hours away. His earnest hope is that his great friend will set the words to music.

Gruber fulfils every hope and the tune is composed in just a few hours. The carol is Stille Nacht; known, in the English-speaking world, as Silent Night.

The first performance at Midnight Mass is a simple arrangement for guitar and choir. The rest, as the saying goes, is history. Many popular songs have their own genesis story, an apparent act of chance or destiny that launches a hit. And Silent Night has been a hit, on a massive scale. 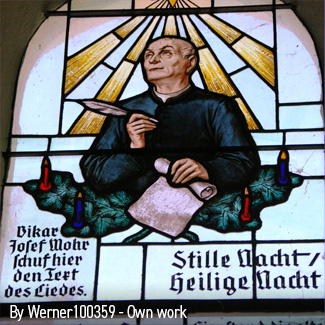 The song is a must have on a Christmas album. This week’s number 1, by Boe and Ball has it, the German classical tenor Jonas Kauffman includes it on his festive offering; both excellent covers by the way. The point I am trying to make is that the song has come to define Christmas. A beautiful and minimalist melody married to a profound and simple lyric, and it works. On every level it works. So significant is it as a work of art, UNESCO has given it special status. Which puts it up there with the pyramids and Stonehenge. This is more than a song; it is a cultural phenomenon.

Bing Crosby’s first recording of Silent Night is still the 4th best selling single of all time. Whether your favourite rendition is from Bing, Sinead O’Connor, Elizabeth Schwarzkopf or your child’s school choir you will know this song. Personally, I think that Simon and Garfunkel’s 1966 version has a poignancy that Josephus Mohr might have approved of.

As for Mohr, the man born to an unmarried girl in difficult circumstances, dedicated his life to following Christ. He never monetised his work and gave what little he did have to the poor, whom he served tirelessly. He viewed Jesus in the same way as we are urged to look on puppies. He’s not just for Christmas; He’s for life.