Over the Summer Bank Holiday weekend, if you are venturing out into Chantry Park Ipswich, chances are (weather permitting) you will see families having fun and picnics being enjoyed. Dogs will be taking their humans for a walk; trees will be showing the early signs of autumn and grass, long since green, gasping for rain. You may also witness groups of friends gathering, at a distance; some people may be donning face coverings whilst down London Road, at Copdock, others will be taking a test to find out if they have COVID-19.

If you do not feel like spending time in Chantry Park, during Bank Holiday 2020, then join us in the DeLorean as we go Back to the Future to the same weekend in 2019.

The evening of Friday 23rd August was warm. There was an air of excitement in the park and, as the sun started to dip, things were about to get noisier. Local band The Darkness was tasked with being the warm-up act for another of our local residents, Mr Ed Sheeran, at the first of his four concerts at the venue.

Tonight 40,000 fans, known affectionately as Sheerios, had gathered to see their man bring his record-breaking sell-out tour to Chantry. Across 260 shows and with over 8 million ticket sales, Ed chose Ipswich to bring his tour to a close.

As the music flowed, the delighted audience were clapping and dancing as they sang along to all their favourite songs. 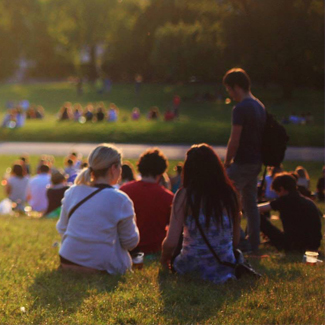 The following day saw Ipswich Town playing away against Bolton Wanderers. With a fine start to the season already, Town was rampant, running out 5-0 victors.

Cinemas were busy across the region too. The top-grossing film for the week was ‘Angel Has Fallen’; the third of the popular series of films which follows a Secret Service agent and his efforts to protect the US President.

Parents were also busy in the shops making sure their children had everything ready for the impending new school year. Once the shopping was done the families would then follow Elmer’s Big Parade through town – in aid of St. Elizabeth Hospice. The trail had run throughout the whole of summer 2019 and the bank holiday weekend was no exception.

And so, what difference a year makes. The school year and Ipswich Town’s season both cut short prematurely by the pandemic, the likes of which nobody could have ever envisaged.

Another ride in the DeLorean anyone?

If you enjoyed this article, you may like: The best of British beaches

You may also enjoy: Why alcohol-free beer may be the perfect summer tipple