A history of the hospice movement

There are hospices all over the UK, but many people know little of the movement’s origins. Here’s the inspiring story of how it came about

A hospice is a special place. Anyone who has visited one will tell you that they are places of light and life, even while dealing with the most challenging circumstances.

Hospices don’t just provide end-of-life care. They also offer pain relief, ongoing treatment for people with life-limiting conditions, and practical and emotional support for the family and friends of patients.

All of that makes for a worthy set of aims. So it is surprising that the hospice movement as we know it only came into existence in the 1960s, thanks to the efforts of one person: Dame Cicely Saunders.

Saunders opened the first hospice, called St Christopher’s in Sydenham, in 1967. Its purpose was not only to care for patients, but also to identify, model and share best practice in supporting terminally ill people and their loved ones.

Prior to the inception of St Christopher’s, the majority of people died in hospitals. Medical professionals often saw a patient’s death as some sort of failure. Saunders, who trained as a doctor after volunteering to care for poor patients while they were dying, wanted to change this.

More fundamentally, she wanted to change attitudes towards people at the end of their lives, or who were living with life-limiting illness.

One of Saunders’s main criticisms of end-of-life care in the 1950s and 1960s was that patients were often left to wait until their painkillers had worn off before they were given a further dose.

There was also a view at the time that offering opiates as a form of pain management came with a risk of addiction. Saunders challenged this, leading to a fundamental change in the care of terminally ill patients.

Saunders coined the term “total pain”. At heart, this involves recognition that pain has physical, psychological, social, emotional and spiritual components. The precise interplay between these elements is unique to each person, so care should be tailored to their needs.

Saunders said: “You matter because you are you and you matter until the last moment of your life. We will do all we can, not only to help you die peacefully but to live [fully] until you die.”

Saunders’s definition of pain and commitment to individual care remains central to the modern hospice movement. In organisations like East Anglia’s Children’s Hospices (EACH) treatments and support are tailored to individual patients. It is the exact opposite of a “one-size-fits-all” approach. 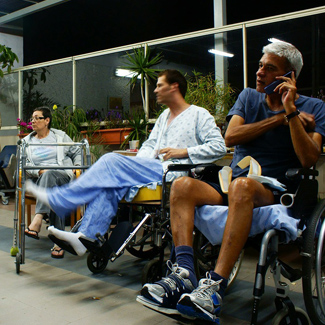 A committed Christian, Saunders also took the view that euthanasia was unnecessary. Indeed, this commitment underpins the ethos of the majority of hospices. Many of them have a Christian basis, working on the belief that they provide an alternative to prematurely ending a patient’s life, and easing their suffering in other ways.

Saunders said of the matter: “Anything which says to the ill that they are a burden to their family and that they are better off dead is unacceptable. What sort of society could let its old folk die because they are in the way?”

Hospice care has now grown into a worldwide movement: there are more than 200 hospices in the UK alone, and many also care for patients in their homes using specialist teams of carers.

All of this comes at a cost, and many people are surprised to learn that hospices receive the majority of their funding through support from local communities. Only about a fifth of hospice funding comes from the government – meaning the movement is dependent on the generosity of benefactors to continue its important work.

Dame Cicely Saunders started the hospice movement compelled by a vision of compassionate care for the dying. Now, it’s our task to keep her vision alive.

If you enjoyed this article, you may like: Martha’s story: why EACH matters to me

You may also enjoy: When words run out: meet EACH’s art therapist

You can look at our open vacancies here.