Today is Firefighters’ Memorial Day and to mark the occasion one of our colleagues suggested his dad (Roy F. Hardman who was a Fireman) could write an article about it. He was pleased to do so and mentioned an incident which touched him the most 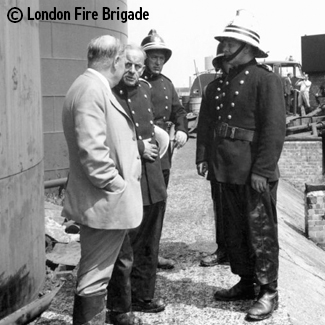 On July 17th 1969 I was serving at ‘L22’ that’s Ilford Fire Station in Ley Street, Ilford. I held the rank of Leading Fireman having recently been promoted.

During my time in both the Essex and London Fire Brigades before and after the 17th July 1969, none of my friends had lost their lives in the course of their duties. However, on this dreadful day, 5 members of the London Fire Brigade lost their lives in an incident at Dudgeons Wharf on the Isle of Dogs. My father’s family lived in the area, so I knew it quite well. I went on duty that night and the mood was rather sombre.

The funerals took place on the 23rd July and the cortege went passed my fire station L22 Ilford. My crew, along with myself and other local crews formed a guard of honour on the forecourt. Once the cortege had passed by, we followed along behind to the cemetery.

At the cemetery, although I did not personally know any of the deceased brigade members, I was very emotional with tears in my eyes. This is because as I was watching a coffin being lowered into a grave, I realised that could have been myself or any member or members of my crew.

The incident at Dudgeons Wharf was caused by a demolition worker using cutting gear to open an inspection cover to enable the inspection of the tank. A spark caused a massive explosion.

There was also a member of the demolition team killed that day as well as 5 members of the London Fire Brigade.

Because of the incident, the Hazchem Code (a warning plate system for hazardous chemicals) was introduced in the 1970s.

If you enjoyed this article, you may like: EACH's chaplain - finding strength through weakness