As the big day approaches Peter Foy finds himself in festive mood. Sort of.

I want to share two stories with you. The first is 100 per cent true. I know because it’s my story. The second is possibly apocryphal but definitely bears repetition.

So, the first comes from a period when I spent a huge amount of my time on the UK’s motorway network, often travelling between Wiltshire and Liverpool. It was the early 1990s and the roads were always busy.

It is late December and I am caught in a massive tailback on the M6, hoping to join the M5.

No Sat Nav. No live traffic information. In the vain hope of getting useful news I tune my radio to the local station. I’m travelling home for Christmas and I have BBC West Midlands entertaining me. It’s a phone-in. The question being discussed?

“What does Christmas mean to you?”

And the calls come in. The wise burghers of Birmingham and its environs share their Christmas values. Many involve a loose concept of family and buying lots of gifts. A significant number talk about access to booze, both because licensing laws have been relaxed and supermarkets are offering great deals. 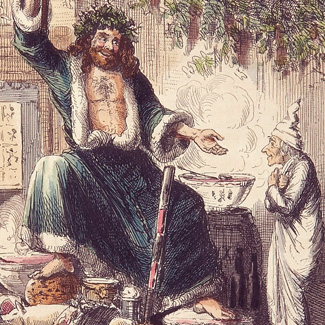 And then the icing on the cake. A guy phones in and declares that the best thing about Christmas is that he can watch Aston Villa a whole three times over the holiday period!

I’m going to be honest with you. I am a committed Christian and an ordained minister, so Christmas does have a spiritual meaning for me. But I recognise that most people don’t share my faith.

So, to my second story. A little later in the decade, I had the enormous privilege of launching a business in the Asia Pacific region. I travelled extensively around places like Jakarta, Singapore, Hong Kong, Bangkok, Tokyo and Australasia. It was the time of the “Tiger” economies. Large numbers of European and American ex-pats descended on these cities, and the locals wanted to make the most of it. Dollars, Euros and Sterling flowed into the local economy like so many rivers feeding the Euphrates.

How do Asian cities respond to Christmas? It’s not their tradition but they have a huge audience of westerners who want to celebrate.

One store in particular wants to get in on the festive act. It’s the Asian equivalent of Harrods, and its managers task their best window dresser to go away and research what Christmas means to foreign visitors.

How much research took place or its form I can’t comment on. The key event is that one Monday morning in late November, the showpiece window is revealed.

A model train winds its way around elves making wooden toys. Top branded perfumes are on display and, in the centre, a sight to behold. White whiskered and wearing a crimson coat: Santa Claus, crucified on a cross of gold.

Christmas in a single image, and so very wrong!

We can probably blame an unholy combination of Charles Dickens, Victorian nostalgia, 20th century marketing and the good ol’ Church of England.

As an ordained minister I should probably give a big shout out for all of the church-based activities that are going on in the next few weeks. Who doesn’t want to see their daughter or granddaughter wrapped in a blue curtain and taking the role of the Virgin Mary?

On the other hand, a lot of them are reinforcing the Disneyfication of Christmas, and that annoys me. If you have any doubt about this, just attend an average Christingle or Carol Service.

As an alternative, you could take a look at the biblical accounts of the first Christmas. You can find them in Luke and Matthew. Be warned, though, you won’t find a stable or three kings.

Christians accept these verses as accounts of one of the four most important events in the history of the universe. The problem is they aren’t very Christmassy. No holly or tinsel in sight.

We can still have a great holiday. We’ll deck the halls, stuff the turkey, gorge on mince pies, watch Her Maj. And, in case you’re interested, the Villains do have a full schedule over the festive season.

So, Merry Christmas one and all.

Or, as Ebeneezer would say…

If you enjoyed this article, you may like: Have a very merry Christmas with these seven great British traditions

You may also enjoy: Give your Christmas a bit of Polish