This was a common reaction during my week with the Mitsubishi Eclipse Cross, and it’s not hard to see why. From the front, the car looks perfectly ordinary, even normal in an outlandish Japanese-styling sort of way.

But get beyond the C-pillar and it all goes a bit futuristic. From the side, the sharp-sloping roofline looks merely eccentric. But from the back, it’s positively peculiar, and exacerbated by an even weirder horizontal pillar that splits the rear windscreen in two.

That makes life difficult for the driver, whose view out the back is inevitably restricted. But while you can learn to adjust to that, the impact on the car’s aesthetic appeal is nigh on unforgivable.

Which is a shame, because once you get beyond the odd appearance, the Eclipse Cross is a perfectly good package. The 1.5-litre turbocharged petrol engine revs freely and generates a pleasing turn of pace. On quiet A-roads, it feels like an oxymoronic combination of full-fat SUV and nimble hatchback, while on motorways it creates an oddly serene driving experience, akin to a Volvo XC90.

No, really. I’m being serious. The Eclipse Cross feels like a far more luxurious SUV when you’re on a straight, flat road. It glides along with little effort, and the comfy leather seats that come as standard on Exceed-spec cars and above make for a cosseting experience. 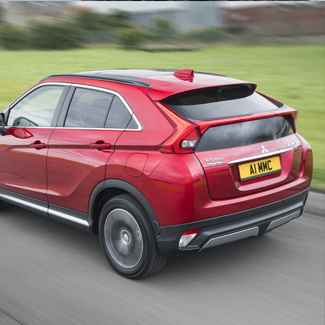 Sure, the CVT transmission is a little strained at times. Like most set-ups of this ilk, it gives the constant impression of hunting for gears, which is odd when you consider that the whole point of a CVT box is that there are no gears to hunt. But, well, whatever, that’s how it feels when you’re in the hot seat.

That said, the 360-degree parking camera is a boon. Just as clear as similar tech on far costlier vehicles such as the Land Rover Discovery Sport and just about capable of obviating the visibility issues created by the Eclipse Cross’s strange dimensions.

Other helpful tech on my test car included blind-spot detection, adaptive cruise control and lane-keeper. There was also a head-up display, which, in another show of Mitsubishi’s apparently wilful eccentricity, projects onto a plastic screen above the steering wheel rather than directly onto the windscreen as in most cars with this feature. That enhances the chances of you being too tall to see it without craning your neck (my experience). And the pop-up screen is oddly distracting when you’re behind the wheel.

For all the frustrations, though, the Eclipse Cross got under my skin. Mitsubishi is a brand with a reputation for achieving this feat, much like Subaru and, increasingly, Dacia.

The thing these manufacturers have in common isn’t value for money (Subaru is actually quite expensive as a brand, but there’s no denying the cost-effectiveness of the other two). It’s rather that they create distinctive cars that ooze character, perform brilliantly, and are very much an acquired taste.

It’s often said that once someone drives a Mitsubishi they’ll never consider another make of vehicle. I think that’s probably true, but confess to not spending enough time with the Eclipse Cross to be converted. By the end of my time with it I was prepared to acknowledge its merits, and could even see why someone would choose to buy one if they longed to be different.

But I know I wouldn’t part with my own money for this vehicle. It’s just too whacky, and not quite well enough executed, to justify the investment.

Oh, and did I mention that it’s funny looking?

If you enjoyed this article, you may like: Just testing: Subaru Levorg 2.0i GT Lineartronic

You may also enjoy: Three things to love and hate about the new Defender