Five tricks anyone giving a speech needs to know

Public speaking is an important skill in the world of work. Here are five things you can do to become better at it

Whatever your occupation, sooner or later you’ll be asked to speak in public. It’s a crucial skill to have, but not something that comes naturally to everyone.

To help build your confidence, here are five tricks that will bring structure, form and pizzazz to your presentation. Get ready to blow your audience away.

1. Establish a connection with your audience

The most effective public speakers are skilled at establishing a rapport with their audience. They know how to push their buttons, make connections, and create the feeling that they’re on the same side.

Consider a seasoned performer like Tony Blair, for example. Love him or loathe him, few can deny his gift for oratory.

Blair’s valedictory speech to the 2007 Labour Party Conference, including his famous line about Cherie running off with the bloke next door (who was, of course, her arch-enemy Gordon Brown), is widely regarded as one of the finest political speeches so far in the 21st century.

Why? Because Blair instantly connected with his audience, deploying what the Ancient Greeks called “Ethos” to establish his authority. He used self-effacement, humour and a gentle underscoring of his credentials to ensure the people in the hall at Bournemouth were eating out of his hand.

If you’re to be effective from a podium, this trick is well worth learning. Show your audience why you’re worth listening to, establish your authority or your shared interests. That way, you’ll have their attention from the get-go, giving you firm foundations on which to build. 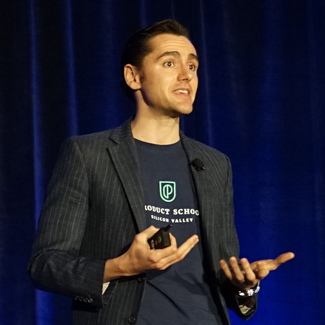 2. Remember the rule of three

Snap, crackle and pop. The good, the bad and the ugly. The Father, the Son and the Holy Ghost.

No one knows the reason, but, linguistically speaking, we love groupings of three. They sit well on the page and when spoken aloud.

If you’re in any doubt, try to construct a list of two or four things. “We need to reform social care, education, prisons and immigration policies.”

Doesn’t work, does it? But change it to this – “We need to reform social care, education and prisons” – and suddenly the rhythm sits much more comfortably.

You can deploy the rule of three in other ways, too. Try to cover three points in your speech, giving it three clear elements that come together to make a whole. In just the same way that we feel oddly satisfied by a list of three things, so too are we pleased by a threefold structure to a talk.

Don’t ask me why. Just do it and you’ll soon see the difference.

Words are powerful. They can change attitudes and start revolutions. They can win arguments and empower people to change the world.

Or they can fall flat, leaving your audience disengaged, uninspired and uninterested.

Worse still, they can become a distraction: rather than enhancing your speech, they’ll actually get in the way of the audience’s engagement with your message.

So remember George Orwell’s famous dictum: “Good writing should be transparent, like a windowpane.”

The point is simple: use words effectively. Keep them simple. Write in short sentences, with a nice rhythm and flow. Read your script aloud before you stand up to deliver it. If you stumble over any section, the audience will, too. So reword it, making it as pane-like as possible.

Oh, and I don’t need to remind you to avoid using words you don’t know the meaning of, do I? No one likes a sesquipedalian.

4. Be yourself, and then some

You know the advice you were given by every schoolteacher you ever had in advance of giving a speech? When they told you just to “be yourself”?

Well, they were only half right. You do need to be yourself, but you need to be a magnified version of yourself.

The reason is simple: when you’re stood in front of a group of people, their distance from you has a flattening effect. Your gestures seem smaller, your verbal emphases are less pronounced.

So you need to dial things up, just a touch. Be a slightly more theatrical version of your true self, and the audience will see you as you really are.

The absolute master of this art is TV presenter Alan Titchmarsh. Look at him presenting any video (like this one, for Waitrose) and you’ll see how he slightly exaggerates his gestures, going just big enough to be noticed, but not so over the top as to seem unnatural. Watch and learn.

5. Finish with a bang

Greek rhetoricians used the term “peroration”, to denote the closing section of a speech. Its purpose is to fire the audience up, encourage action and give them a take-home message.

You need a peroration to make your speech effective. Build to a crescendo, using slightly more dramatic language and tighter phrasing.

Use rhythm to give a sense of drama. Address your audience with a challenge or an imperative. They need to be inspired to act. They need to reshape the world. They need to go from your presence and be innovators, revolutionaries, people who make a difference.

Of course, if your speech is a five-minute toolbox talk about Health and Safety, you may not want to go overboard with your peroration. But whatever your topic, you should give a clear sense of what the audience needs to do with the information you’ve imparted. There’s no point talking if it doesn’t impel some kind of a response.

If you enjoyed this article, you may like: How to communicate with your employees