We need a better politics, and it needs to happen in person

Let’s make a promise to each other. We’re not going to fall out over the next 800 words or so. You’re not going to bombard the post with Below the Line comments declaring my idiocy or calling me out for my political bias.

Why? Because this isn’t a comment about any particular political ideology. It’s not a defence of Corbynism or an argument in favour of Boris’s Brexit. It’s not a call for a second referendum or free fibre-optic broadband, nor is it an attempt to advocate free enterprise and a low-tax economy.

It’s just a chat, between people who are affected by these things, about the nature of political discourse today.

I was heartbroken the other day to see two of my friends falling out over their differing political views. I don’t just mean friends in the Facebook sense. I mean people I actually know, who I grew up with and would gladly share a pint or two with on any day of the week.

But it was on Facebook that they were disagreeing. More than disagreeing. They were shouting vitriol at one another. Threatening never to speak again. Wondering aloud what they ever saw in one another.

And here’s the thing. Had that conversation taken place in person, over that pint or two in the pub, it may well have got heated. There may well have been raised voices and the occasional ad hominem attack.

That’s what happens when tensions run high, when people argue about something that they really care about.

But by the end of the evening, once the conversation had returned to England’s win over Montenegro or the merits of the new Range Rover Evoque, we’d have all gone back to being friends. We’d have been reminded of how much we like each other, of our shared history, of things that transcend politics. We may have even got to a stage where we could tease each other about our political opinions, celebrating our differences rather than feeling angry and confused by them. 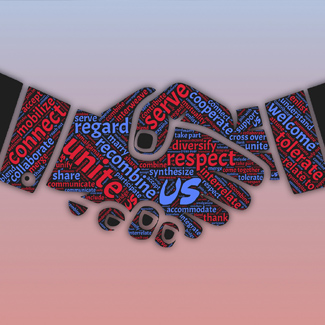 Alas, in the virtual world, such healing is impossible. You bash out your frustration with those who don’t see things your way, share the odd insulting meme about their position. Tell them they’ve got it wrong and need to think again.

And then you walk away, probably still seething. As far as you’re concerned, the conversation is over and you’ve said your piece. Unless they have the temerity to offer a rejoinder, in which case you’ll happily knock them back down, entrenching your position and further damaging your relationship.

But think on this: what would you do if they were in your kitchen with you as you angrily boil the kettle, ranting about their political naivety and chucking your phone on the worktop in rage?

Ask them to leave? Tell them they’re stupid? That they only care about themselves?

I’m guessing not. I think you’d carry on talking, circling around the difficult subjects until you found some way to disagree lovingly. You may still feel your blood boil when they defend a position you simply can’t agree with. But you’d be reminded by their presence of their good points, of the reason you became friends in the first place.

So I’m calling for bold action. Not an end to political discussion. This general election is too important not to think carefully about how to vote. There’s too much at stake not to risk having your views challenged and reshaped through a constructive conversation with your opponents.

But let’s do it in person, rather than via angry thumb taps on a phone. Let’s meet weekly, in the pub or a local café, and chat it all through. You can invite anyone you like: friends, neighbours, colleagues. Maybe even your local parliamentary candidates.

But the crucial rule is that no one’s allowed to storm out. You have to end the evening talking about other stuff, the stuff that really matters in friendships: your health, your happiness, your common interests. Your shared humanity.

Then resist the urge to continue the debate online or via text. Keep on thinking, keep on watching and reading the news, letting your opinions gestate and undertaking careful research to ensure you are properly informed. Read the party manifestoes, check your facts. Don’t engage with simplistic memes or internet propaganda that you know in your heart of hearts is designed only to manipulate you.

And return to the conversation next week, and the week after, ready to engage in loving disagreement once again. Because that’s how we’ll get out of our current political mess. By talking, constructively, and coming to appreciate a spectrum of opinion.

Who knows? You may even be able to spend election night together. And the greatest success, the best possible sign that our democracy is alive and well? That’ll come when you can look your friends in the eye and congratulate them on a victory at the polls, even though you disagree with their views.

That’s when you’ll know you’re doing it right. And that the future of our country is in safe hands: not those of the politicians, but ours. The people who can really make a difference.

If you enjoyed this article, you may like: From the horse’s mouth: six books about political leaders from 1997 - 2019

You may also enjoy: What are catalytic mechanisms?